Posted at 21:57h in Events by Andy Bhatti
Share

On April 2nd 2016, Andy Bhatti Intervention and Addiction Services and Options Addiction Treatment Centre will be teaming up with Major League Baseball Superstar Jose Canseco and model Leila Knight on the fight against Opiate addiction.

Opiate addictions in Vancouver, Calgary and all across Canada have increased over 200 per cent in the last 3 years. Canada is the world’s second-largest per capita consumer of opioids and the fallout is being felt across the country. Report have found that from 2009-2015, over 1000 Canadians died as a result of fentanyl, a powder opioid that Is available by prescription and is also manufactured in local drug labs and sold on the streets. Fentanyl is a highly powerful synthetic opiate that’s more powerful then morphine and heroin. When fentanyl is prescribed by a Doctor it is used to treat patients with serve pain or to manage the pain after surgery.

What the Doctors don’t tell you ….

Opiates are pharmaceutical form of Heroin. Once you have been doing the drug for a few weeks your body will build immunity to the drug. Doctors don’t usually tell the patients how highly addictive these drugs are or how hard they will be to come off of. Once opiate addicts have been on opiates for a few years. The safest way to come off of fentanyl and other strong opiates like hydromorphone is to be put on methadone or suboxone while in a supervised detox facility or drug and alcohol treatment centre.

Once the Doctor finds out you have been addicted or abusing the drug, they will usually cut you off your meds. That’s when most opiate addicts resort to buying the pills of the street. Because they now have no other choice. At this point, they must keep taking the drugs to survive. Since they are now physically addicted to the opiates, their body will start to shut down with out them.

Once the opiate addict realizes they are hooked on a prescription heroin, they will most likely start using heroin off of the street, as its more accessible and is sold at a much lower price than prescription pills.

Our goal on April 2nd is to raise awareness on opiate addiction and to let the public and families know that if you know someone who is abusing opiates, Andy Bhatti Intervention and Addiction Services is here to help. Call us now to book an Intervention before its to late…

Fentanyl is the #1 prescription pill that’s killing people all across Canada.

Interventions are always cheaper than a funeral.

Jose Canseco will be playing slow-pitch, hitting in the homerun derby and also signing autographs by donation on Saturday April 2nd at the Exhibition Park in Abbotsford British Columbia. There will also be a chance for you to win great prizes at our silent auction table and get your picture taken with Jose Canseco. 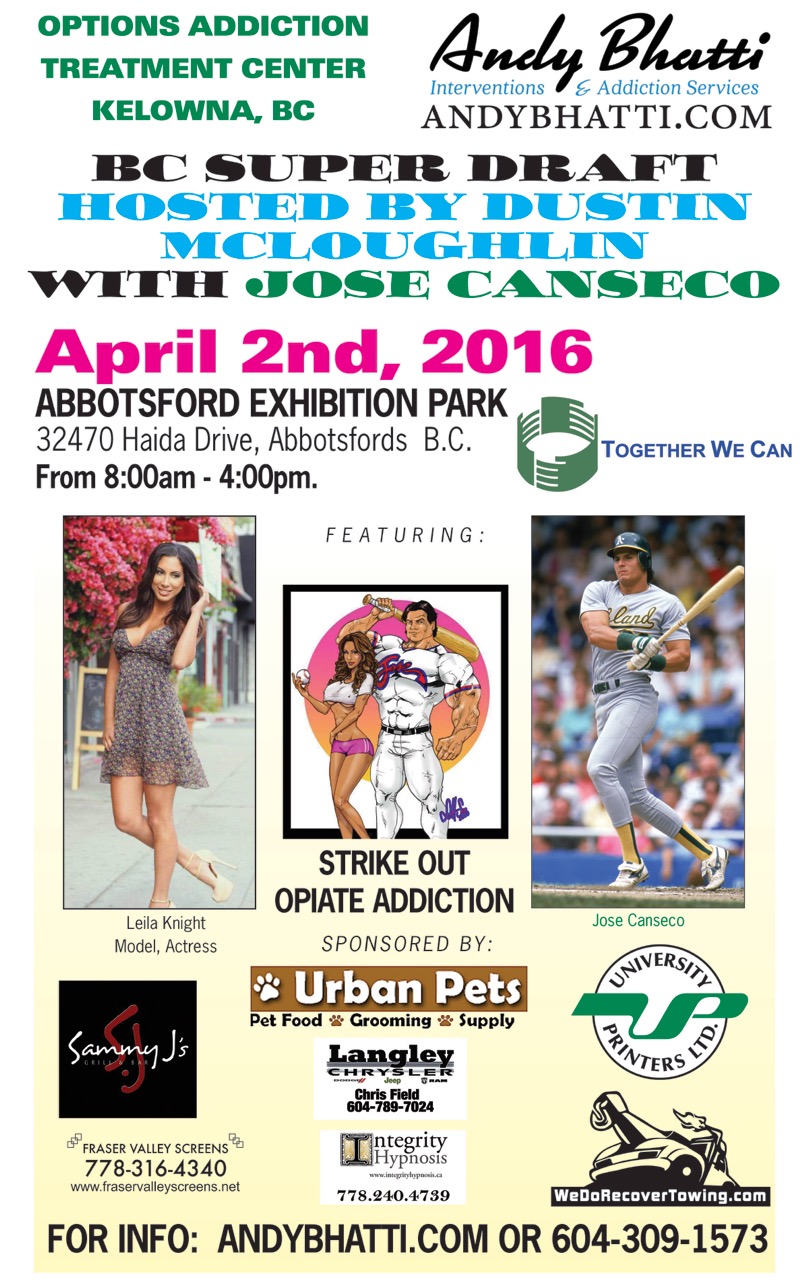