Posted at 21:58h in Events by Andy Bhatti
Share

From October 14th-17th 2016, Andy Bhatti, a drug & alcohol interventionist and survivor of childhood sexual abuse will ride his bicycle 495 kms in 4 days. Graham Wardle from the hit CBC TV series ‘Heartland’ will ride alongside Andy to show his support in raising much needed awareness for childhood sexual abuse and to advocate to change and implement laws in Canada to help survivors of abuse. 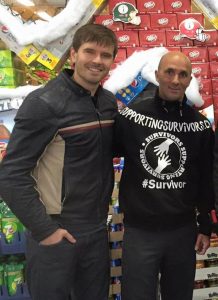 Their goal is to raise the much needed awareness for survivors of childhood victimization, and funds for Sophie’s Place Child and Youth Advocacy Centre. Sophie’s Place is one of the few agencies in the country that provides specialized support for younger victims of abuse.

Through fundraising and public education, the goal is to eradicate the stigma associated with all forms of child sexual abuse and raise the much needed funds for existing agencies, providing services for victims.

The focus for this ride is to raise awareness and have the Government change the laws on how many hours of therapy victims of sexual abuse receive. Right now, victims are covered for 20 hours of therapy – that’s only 14 sessions. That’s not nearly enough hours to help heal a survivor of all the trauma and abuse they have survived.

Furthermore, there is no supervision of registered sex offenders but there is on people who grow medical marijuana? The police put out public awareness campaigns on so called gang members and drug dealers, but not on sex offenders. Sexual abuses could be prevented, if only the laws were changed.

If people don’t pay their child support payments or their Port Mann bridge tolls, the government will take their drivers license and passport away. However if you’re a sex offender and you don’t pay the judgement owed to your victims awarded by the courts – the government does not step in.

The laws need to change now.

Andy’s Big Brother from the Langley Big Brothers Association sexually abused him over a five year span, from the ages of 9 to 14. At age 14 Andy ended the abuse by running away. By then, the damage was done though.

Once the abuse started, Andy started acting out and getting into fights, running away, lying, stealing and leaving school in grade 5. He turned to a life full of drugs, crime, gangs and violence to escape the pain.

Andy started smoking marijuana at the age of 12 to escape reality. By the age of 13 Andy had already been to jail and moved on to harder drugs. By age 16, Andy was a full-blown heroin and cocaine addict and had spent as much time inside a jail cell as he had out on the streets. He carried on a life of crime and addiction until he was 27 years old.

After years of being clean off cocaine, heroin, methadone and all other substances, he realized that if he could get clean, anybody could.

In 2012 Andy began a campaign bringing awareness to childhood sexual abuse and survivors living with addiction. In 2015 Andy won the “Courage to Come Back” Award in the addiction category. This award is presented by Coast Mental Health of British Columbia.

Andy strives to continue raising awareness and prevention on addiction and childhood sexual abuse, working in communities all across Canada.

For more information on this ride or to donate to the cause please contact Andy Bhatti.